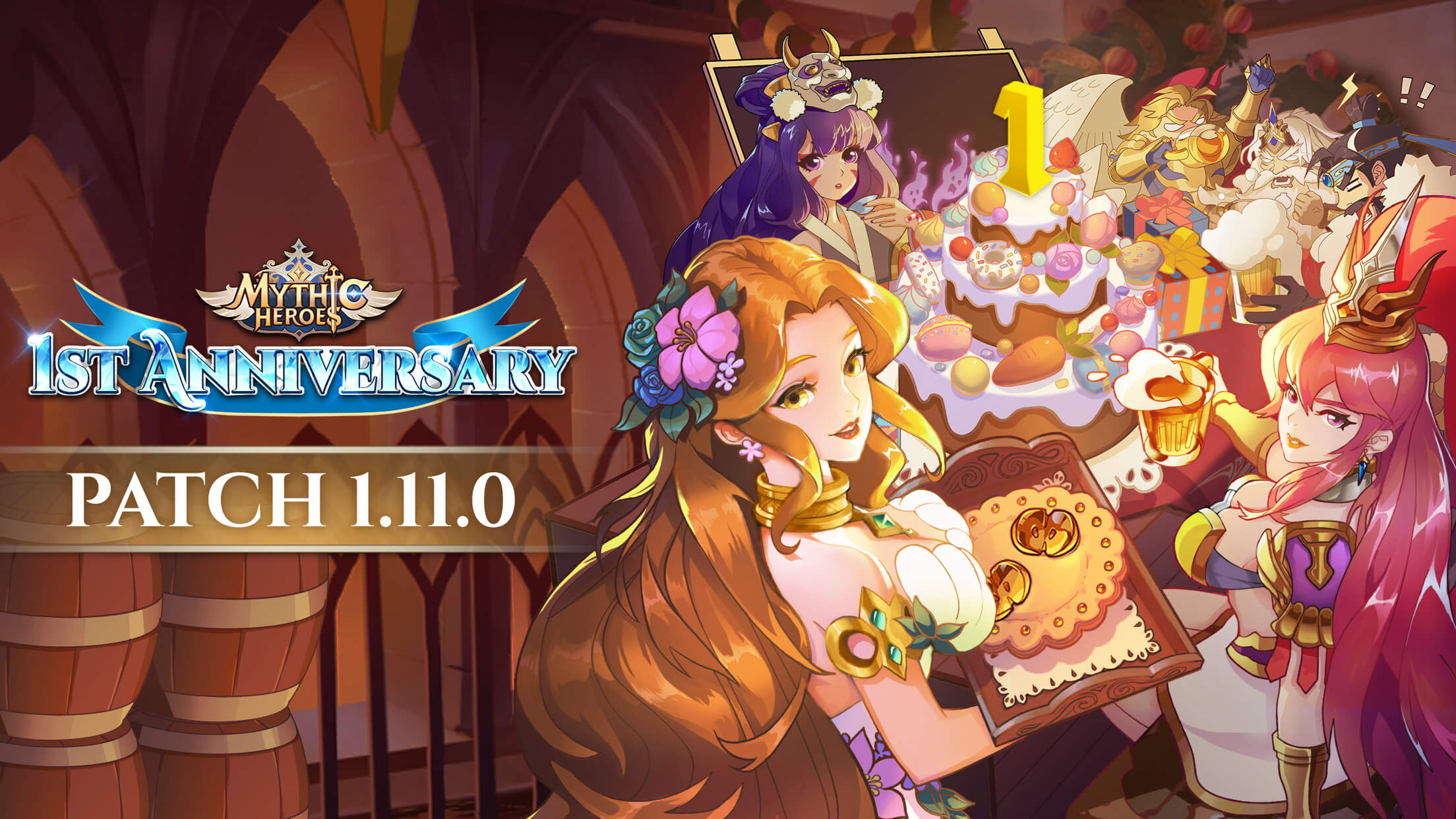 It’s been nearly 1 YEAR since Mythic Heroes made its way onto the app store for players to start adventuring throughout the Ascension Realm. From summoning your favourite Heroes from myth and legend, to conquering the most difficult bosses taking residence in Valhalla, Mythic Heroes has seen immense growth thanks to our fantastic community of players!

In this update, we’ll be preparing for a month-long anniversary celebration with new events, new heroes, skins, and LOTS of free rewards for all of our players!

Check out some of the upcoming celebrations below!

Our players have been asking for an event calendar for a long time, and we’re excited to introduce an in-game events calendar to Mythic Heroes! This calendar will showcase gameplay events such as Valhalla and Bifrost Bridge, store promotions, new Hero releases, and more!

Check out the 1st Anniversary events calendar to see what’s coming to the Ascension Realm and some special Anniversary presents!

Every week, players can check in to celebrate Mythic Heroes’ first anniversary to claim some EPIC rewards! Check out the schedule and rewards below:

Kingdom Raiders – Team Up and Battle!

Long ago, a pirate king hid many treasures in an enchanted sea. Now, Summoners and their friends have found this lucrative treasure trove, and it’s a battle against others to claim the almighty treasures hidden below! Divide and conquer as much of the enchanted sea as possible to claim all the Pirate Gold for yourself!

Enter the Kingdom Raiders event through the Event Center or event banner and start building your team! To make a team, players can invite others from their Friends List or from their guild and can have up to 5 players per team. Summoners can also play solo, and they will be randomly matched against other solo players.

During the gameplay phase, up to 4 teams battle against each other by collecting and rolling dice against the other team(s). Normal Dice can be collected by completing daily quests, while exclusive Golden Dice can be purchased using Novastar Gems from the event shop. Each game is divided into 4 periods, and with each period the maximum dice roll value will become smaller (12 → 10 → 8 → 6). At the end of each battle phase, all Normal Dice will be reset in preparation for the next battle whereas the Golden Dice inventory will carry over between battle phases.

Once a dice is rolled, the number rolled gets stored and added to your team’s bank. Any player from the team can use the stored points to claim a square on the game board and once the square is claimed, the points used will be consumed and your team will take ownership of that square. To claim a square, the used points MUST be higher than the displayed score on that square and must be adjacent to an existing square your team controls. At the end of the game period, the team with the most claimed squares wins!

Rewards of Pirate Gold will be awarded to players based on the number of squares occupied by your team at the end of the battle period. Exchange your earned Pirate Gold during the last two days of the event for items in the event marketplace.

What better way to celebrate a party than with some fireworks! The Fireworks Festival makes its return on September 3rd alongside the Nian challenge.

We’ve added an additional rewards system to our rotating weekly events with the Lunar Wheel! Complete weekly event challenges in the Beastly Echoes, Tower of Babel, and Zodiac Mapping to earn a new prize: Crescent Keys.

Once you have collected Crescent Keys, you can use them to spin the Lunar Wheel to have a chance at winning BIG prizes! After spinning the Lunar Wheel a certain number of times, players will receive an epic bonus reward!

We’ve also added cumulative server rewards for all weekly events! Once your server reaches certain milestones in constructing floors in the Tower of Babel or completing maps in Zodiac Mappings, all Summoners can claim a bonus reward!

A new challenge has appeared in the Divine Chronicles! After completing stage 50 in all faction-based Divine Chronicles, Summoners will unlock the Legacy Chronicles featuring 50 new stages to challenge, focusing on the stories of some of our UR Heroes!

We have added the ability for players to Pillage certain challenges multiple times at once! This optimization applies to Trials of Ascension battles, Guild Blade Wraith challenges, and Guild Wardragon challenges.

This has been one of our community’s most requested suggestions, and we’re excited to finally bring it into the game!

We’ve added a “Like” feature to your Antique collection! Now, you can “Like” an antique in your collection to help identify which one you’re focused on upgrading. With the new “Like” system, we have also added an additional filter which allows you to only display your liked Antiques.

We’re excited to share not just one, but TWO upcoming Heroes who will be joining us in the Ascension Realm this month!

We have also made changes to the New Hero purchasable pack to a multi-day pass, rewarding you with the new Hero as well as other bonus gifts each day you log in.

The Archangel joins the Ascension Realm in this update as the latest SSR unit. As a mage in the Luminarch faction, use her magic damage and control of the battlefield to protect and conquer!

Gabriel will be released with her Earthly Archangel skin, which can be collected for FREE by logging in daily during the first week of her release!

YAR HAR FIDDLE DEE DEE – Being a pirate is all Poseidon wanted to be! Poseidon will be receiving a new look with his Collector’s Exclusive Pirate Captain outfit. This new look will be available in the Fashion Store on August 27th, 2022 for 100 Novastar Gems.

The Centaur Sage Chiron will be available to summon as an SSR unit later in this update! Belonging to the Verdian faction, this fighter hero will provide consistent damage throughout the battle while summoning the Soul of Sagittarius. Look forward to his arrival in the Ascension Realm on September 3rd, 2022!

Fixed a bug where Ganjiang & Moye’s ultimate ability would occasionally not work as intended.

Fixed a bug where Flower Dance would sometimes not deal damage to enemies.

Fixed a bug where Lotus Branch would sometimes not recover health when the affected ally took lethal damage.

Fixed a bug where the following divinity skills would sometimes last longer than expected.

Fixed a bug where completing achievements in the Divine Chronicles were not being tracked properly and rewards could not be claimed.

Tap the new icon located right beside your IGG ID on your Profile Page to copy it to your clipboard. Now, your IGG ID can be easily shared with a single tap!

The “Use 10x” function has been updated to use only your remaining weekly event currencies (ie. Luminous Pearls, Ascension Hammers) when you have less than 10 of that currency remaining. For example, if you have 6 Ascension Hammers remaining in your inventory during the Tower of Babel weekly event you will consume all 6 hammers upon using the multi-use function.

We hope you all enjoy our month-long anniversary celebration! Follow our social media pages and join our Discord to stay up to date with other news and celebrations surrounding our first anniversary (and maybe some bonus gifts too)!