Halloween has come to the Ascended Realm! Enter Halloween Town and participate in the Masquerade Ball, the Pumpkin Contest, and more!

Throughout the next two weeks, all Summoners will be able to participate in the Halloween Event in Mythic Heroes. The event can be found by tapping on the Banner at the top of the Campaign home screen. This will bring you to Halloween Town where you can find all the features of the Event!

Below, we have listed all the areas of the Halloween Town event, to help you navigate through our first Event!

Every day that you check in to the Halloween Event, you will be able to collect free rewards such as Magic Wands and Random Halloween Candies! 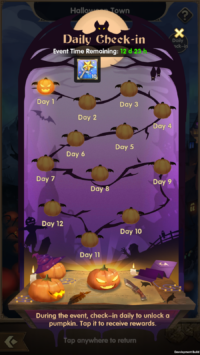 Each day during the Halloween event, you will have a chance to battle against Hades or Persephone (rotates every 24 hours) in their Exclusive Halloween outfits! Battle these bosses to get rewards of Rainbow Candies and various random Candies to use in the Candy Kiosk! Make sure you change your teams to combat these Boss versions of Hades and Persephone, as they will use the same abilities that they use as Heroes! 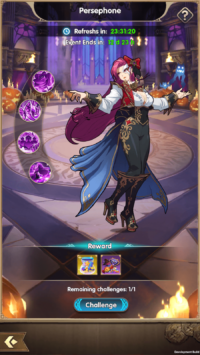 At the Candy Kiosk, you can trade the Candies you have earned for Gift Boxes with varying rewards, including Diamonds, Rune Fragments, Artifact Fragments, and more!

Each time you collect a Gift Box, you also make progress towards unlocking the Event Exclusive Hecate Halloween skin! You will need to collect 20 total Gift Boxes to collect this Hecate skin! This skin will only be available through the Halloween event so make sure to collect it while you can! 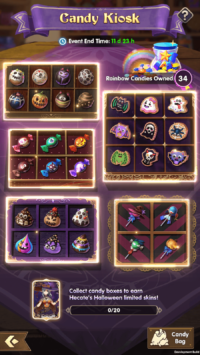 The Pumpkin Farm is where you will spend the Magic Wands that you have earned from your Daily Quests and other Halloween activities.

Collecting Pumpkins for the contest will enter you into 2 contests! Daily you are entered into a leaderboard for your largest pumpkin to earn Pumpkin Coins. You are also entered into a contest for an Exclusive Avatar Frame based on your ranking at the end of the Halloween event.

Summoners can also collect rewards from the Harvest Festival which will give rewards based on the number of Pumpkins you collect (similar to the Hero and Pantheon passes). The Harvest Festival rewards are items including Diamonds, Magic Wands, and Skin Vouchers for Summoners to spend on the Exclusive Hades and Persephone Skins! 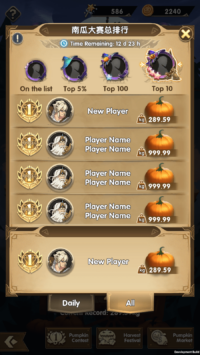 This is where you will spend your Pumpkin Coins! There are many rewards available including Divinity Gems, Summoning Scrolls, Hero Shards, and more!

All your remaining Pumpkin Coins will be converted to Gold at the end of the event. 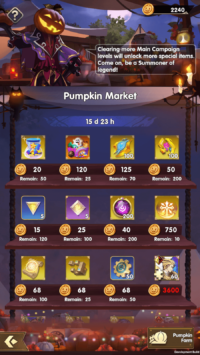 The Mythic Heroes Store will also include packs that you can use to top-up the amount of spooky Halloween rewards you have! Packs will include Magic Wands and Candy packs depending on which packs you choose.

Key Features of the Halloween Event